Government will resume construction of the Mexico-Querétaro train

Jiménez Spriú, SCT holder, stressed that, on roads, the routes that Mexico has are not competitive compared to those in the United States and Canada.

The Secretary of Communications and Transportation, Javier Jiménez Espriú (SCT), said the federal government will launch a tender that will resume the construction of the Mexico-Querétaro-León Train Y, Likewise, the development of a Chalco - Santa Martha suburban train, regardless of whether the analysis is carried out between Guadalajara and Aguascalientes and for the termination of the Mexico-Toluca train. 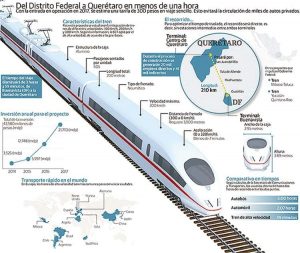 The official noted that, also, it is planned to do a suburban train from Chalco to Santa Martha, qWhat is a project going forward, once the studies are completed and the financial mechanisms are under analysis.

Said such a means of transportation will serve to bring the different airports of the Mexican Airport System closer.

On the other hand, stressed that in terms of roads, the routes that Mexico has are not competitive compared to those in the United States and Canada. Added that, in international measurement, our country takes the place 34 from 140 countries, while the American Union has the post 5 and Canada on 17.

Added that The T-MEC is a mechanism of great opportunity and enormous benefit for the country, but it will take a lot of work on the road infrastructure, as in the port. "At the airport we are not so bad, but yes in ports and very bad in telecommunications.

He stressed that once "there are no more moches" there are equivalent resources that will allow the present administration, make a 25 percent more works.